Forty-seven of us gathered in Yerevan, Armenia. Diverse backgrounds from 12 different countries, but one common objective: to summit Mount Ararat.

It took us a torturous 16-hour bus ride to cross both borders of Georgia and Turkey and arrive in Dogubayazit, where we spent the night prior to our hike.

After six hours of hiking, we reached Base Camp One at 10,500 feet — that’s where the singing and dancing from our 5 a.m. bus ride continued.

The following morning, we started our ascent to Base Camp Two at 13,800 feet. With limited space, and almost 90 people — as we shared the camp with two other groups — we were left with very little room to pitch our tents in the small and rocky area.

We napped right after dinner in order to wake up at midnight to start our final ascent to the summit with our headlamps glaring and canteens full of tea. We reached the beautifully shining, snow-covered Mount Ararat summit at 7 a.m., at an altitude of 16,850 feet.

We celebrated at the summit for an hour. After the initial emotional moments of hugging each other, the group gathered to dance the Armenian “Kochari.”

We wish that, one of these days, and hopefully soon, Turkish authorities declare Mount Ararat a “Free Mountain” so people — young and old — could climb the Biblical mountain with no government restrictions.

Adroushan Andy Armenian is the Honorary Consul of the Republic of Armenia in Las Vegas. 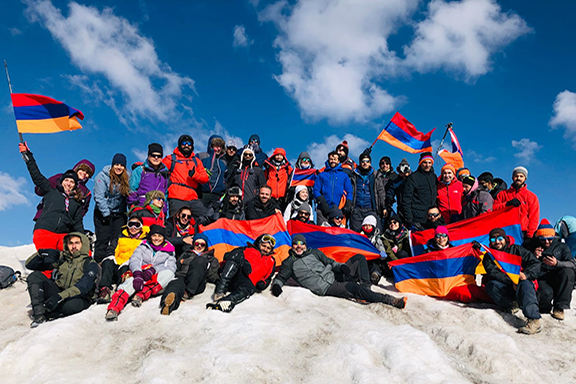