NEW YORK, N.Y.—The Centennial of the Armenian Genocide last year reinvigorated worldwide efforts to not only commemorate the massacres of 1.5 million lost lives but to seek recognition and justice with renewed energy.

Entering a new century of commemorations, thousands gathered in one of the most illustrious landmarks in the world—Times Square, New York—on Sun., April 24, to pay homage to those killed in 1915 and to show the perpetrators and the world at large that the legacy of those who perished during the Armenian Genocide continues to live on. 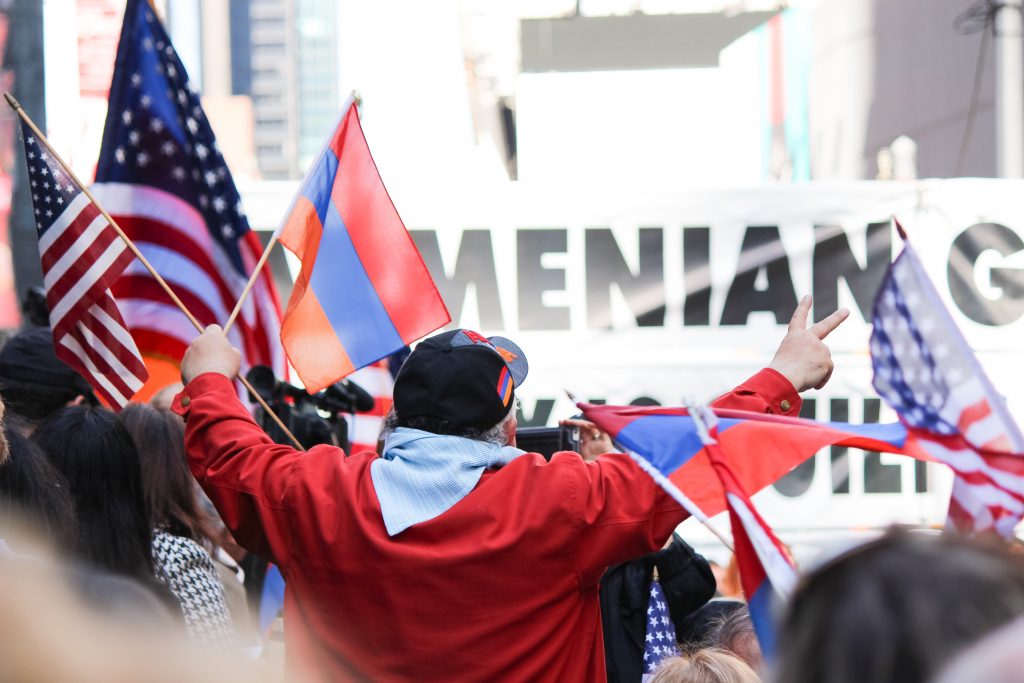 Descendants of survivors flanked every corner of Times Square, holding high the flags of Armenia and Artsakh (Nagorno-Karabagh Republic/NKR), memorializing their ancestors, and showing ongoing support for their homeland.

The full and seamless program, planned and executed by the Knights and Daughters of Vartan for the past 31 years, once again drew Armenians from the East Coast to the center of New York City, displaying their dedication to the memory of the martyrs while calling for justice. Elected officials, who show steadfast support for Armenian Genocide recognition in the U.S. year after year, were in attendance and affirmed their commitment to the Armenian people, including Senator Robert Menendez (D-N.J.), who insisted that “genocide is genocide and it cannot be called anything else.”

“We are commemorating more than a century of silence,” said Menendez, who has continuously sponsored resolutions in Senate that recognize the Armenian Genocide as a crime against humanity.

Menendez spoke of Turkey’s distortion of history and the government’s relentless denial, vowing to “set the record straight.”

“There is no other word for it,” said Menendez, who as chairman of the U.S. Senate Foreign Relations Committee worked hard to pass Resolution 410, demanding that the U.S. acknowledge the Armenian Genocide.

“We must fully commit ourselves to the fundamental truth that what happened between 1915 and 1923 was a blatant act of genocide and recognition must come from Turkey and our country as well.” 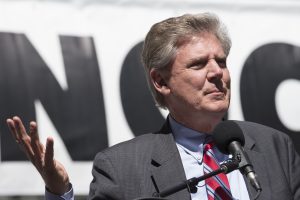 The founder of Congressional Caucus of Armenian Issues, Congressman Frank Pallone, Jr. (D-N.J.) spoke of the importance of continuing to commemorate the Armenian Genocide, especially in the wake of the recent hostilities in Nagorno-Karabagh.

He urged the U.S. to cut off military assistance to Azerbaijan and demanded that Aliyev come to the peace table in order for Artsakh to join Armenia or become an independent entity.

Pallone noted that almost every state in the U.S. has recognized the Armenian Genocide and it is through continued demonstrations that progress will be made.

“It is important that you, as members of the Armenian Diaspora, stand strong,” he said, before adding, “Artsakh is Armenia.” 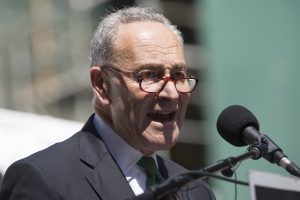 “It galls the survivors and it galls those who lost loved ones to see people denying their suffering,” said Schumer. “I stand with you in labeling the atrocities against the Armenian people as genocide.”

Schumer said it was important to remember the stories and commemorate with a collective spirit because the “deniers cannot kill the truth and will never kill the truth.”

Reflecting on his friendship with the late Sam Azadian, the founder of the Armenian Genocide Times Square Commemoration, Schumer said he attends every year “because it’s my own sacred duty to speak out against the terrors of the past and against those who cannot speak of it themselves.” A native of Turkey, academic Umit Kurt, who specializes his research in the confiscation of Armenian properties during the Armenian Genocide, spoke of Turkey’s denialism and the “extreme violence and mass annihilation that befell on Armenians.”

Kurt conveyed the questions he has asked the Turkish state, to which he has not yet received responses, particularly in regards to why the archives in Turkey are closed for research.

“Turkey continues its 101 year policy of lies and denial with great arrogance and determination and continues this policy with new techniques and methods,” said Kurt, a Ph.D. candidate in the Holocaust and Genocide Studies program at Clark University, under the supervision of distinguished Turkish historian and academic Taner Akcam. “Turkey has internalized deceitful policy that lies have turned into truth and truth has turned into the regime.”

On behalf of Andrew Cuomo, governor of the State of New York, Gina Martinez, Deputy Commissioner for Regional Affairs and Federal Programs, issued a proclamation declaring April 24, 2016, as Armenian Remembrance Day in the state of New York.

Dr. Pamela Steiner, the great-granddaughter of Henry Morgenthau, former U.S. Ambassador to the Ottoman Empire during the Armenian Genocide, said her great-grandfather promoted American-style democracy to the Ottomans, who thought would heed his advice.

“Ambassador Morgenthau spoke frequently of his admiration of Armenians as a remarkably able and industrious people,” said Dr. Steiner, a Fellow at the FXB Center for Health and Human Rights at the Harvard T.H. Chan School of Public Health. Dr. Steiner also spoke of healing and the “monumental collective trauma of genocide.”

“The importance of healing includes how it informs efforts for democratizing, ending of genocide denial, acknowledgement of what happened by Turkey, accompanied by apology and payment of reparations, and correction of history teaching.”

Best known for her work documenting the Barack Obama campaigns, photojournalist Scout Tufankjian spent 6 years chronicling Armenian communities in more than 20 countries for her book, There Is Only the Earth: Images from the Armenian Diaspora Project.

Tufankjian said she wanted to explore the idea of being one people so she went on a search to figure out what connected the Armenians a century after the genocide.

She found that “the past is reflected within us” and “all of our kids, whether young kids in India or kids in Lebanon, or these kids right here, all share the spirit of the survivors.”

“Even though it must have seemed unimaginable to those who lived thru horrors of 1915, here we are,” said Tufankjian. “Look around, we are still strong and we are still one people.” The daughter of Holocaust survivors, Dr. Joan Rivetz, who serves as the New Jersey Civil Rights Commissioner and the Associate Director of the N.J. Commission on Holocaust Education, said it was instrumental that the Armenian Genocide be included in official school curriculum.

“It is vital we do education outreach on the genocide, especially with our youth since they will carry the responsibility of remembering into the future when many of us will no longer have a voice,” said Dr. Rivetz. She spoke of the significance of commemorating the genocide in order to keep the truth alive and show respect to those who perished.

“Armenians and Jews of the Diaspora and those yet to come must continue in solidarity to remember the truth, and undeniable fact of the dark parts of our parallel histories,” said Dr. Rivetz. 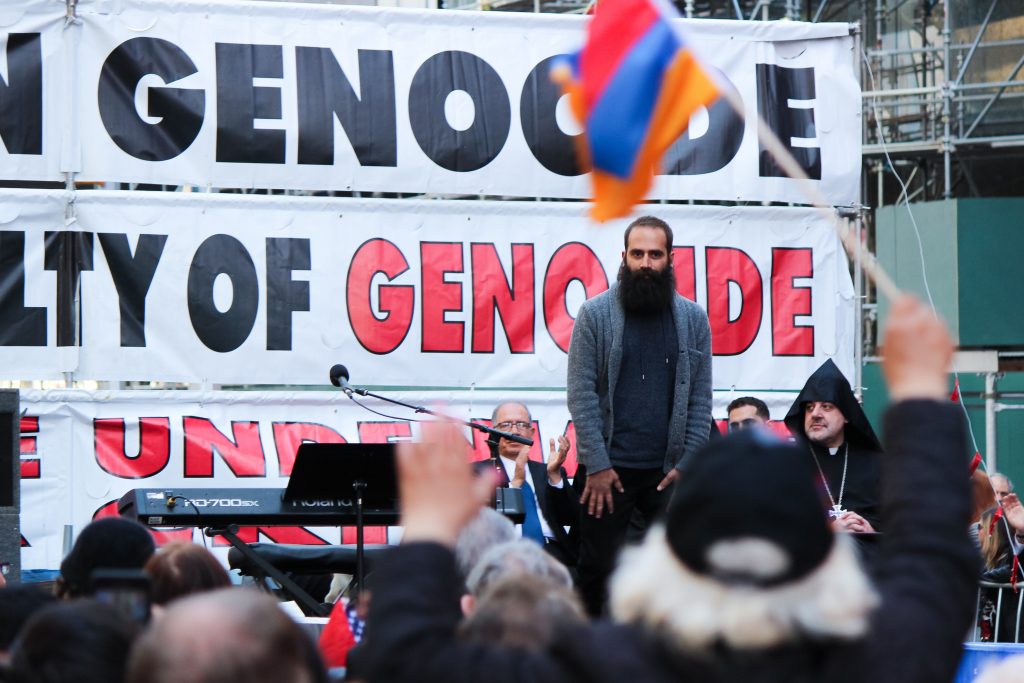 Performing with his son, internationally renowned oud player and composer, Dinkjian sang “Anoush Tzaynut” (Your Sweet Voice) dedicated to Armenian mothers, as well as a traditional folk song from Dikranagerd, where his family is from.

“The atrocities continue today in Dikranagerd,” said Ara Dinkjian. “This Dikranagerd folk song demonstrates not only how we as Armenians have survived but how this unique Armenian dialect is so complex and rich.” Dinkjian’s final song, the moving “Herosner,” was dedicated to all of the Armenian heroes.

Closing out the program, Simonian, who traveled from Los Angeles to perform at the Times Square commemoration, bridged the past and present, singing his first song, “Dzirani Dzar” (The Apricot Tree), which was written by Komitas over 100 years ago.

“Komitas was one of the many Armenian intellectuals gathered on April 24, 1915 and sent into the desert to be tortured and killed,” said Simonian. Although Komitas survived, he spent the rest of his life in an asylum in France, suffering from post-traumatic stress disorder.

His second song, a cover of John Lennon’s powerful ballad, “Imagine,” inspired hope for a world that will one day be filled with peace.

Simonian performed his number one hit and fan favorite, “Safe and Sound,” concluding a fulfilling afternoon of remembrance and a revived commitment to Armenian Genocide recognition. The Shnorhali Choir, under the direction of Vagharshak Ohanyan sang the national anthems of the United States and Armenia, as well as “God Bless America.”

The Armenian Radio Hour of New Jersey, led by director Vartan Abdo, streamed the event live in video format worldwide, reaching more than 50,000 people, with the assistance of his dedicated volunteer staff. 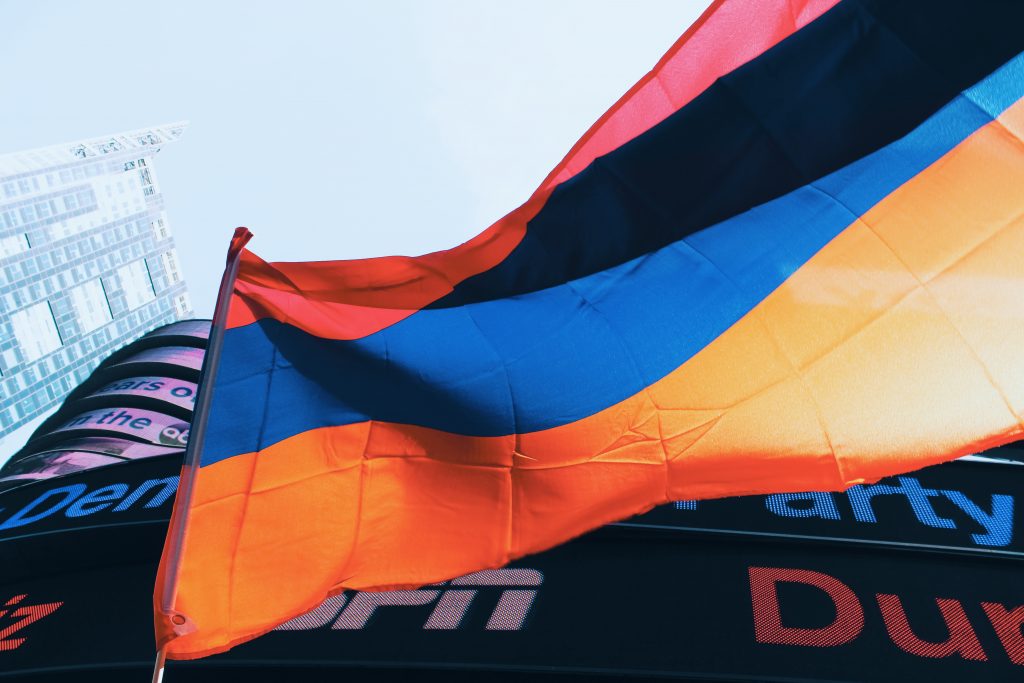